on the plate - +Wondermilk, Damansara Uptown

One night, we were looking for a place to grab a quick and light dinner (it was probably about 9pm, yes we were both working late again). We had seen this place a few times, usually while driving to pneo's place nearby, but never had the opportunity to drop by.
This time, we decided to give it a try. First impressions of the place - it's cosy, but way too many stairs (the place is uneven so there's lots of steps going just up or down by one or two steps. It's a nice effect, but just ever so dangerous especially if you're carrying trays of hot drinks)
Unfortunately, by the time we got there, the kitchen had closed, so no hot dinners to be had. However, they did say that they could still make sandwiches, so we ordered some sandwiches from the menu, and I decided to try out their signature drink - wondermilk of course! 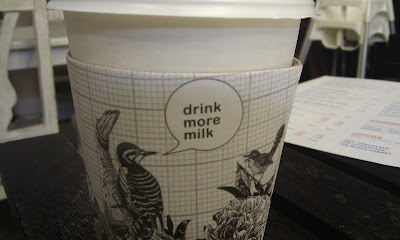 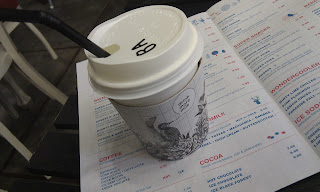 Banana wondermilk (RM6) - It was nice, but I felt slightly cheated by paying RM6 for a tiny cup of milk with a shot of banana flavoring. 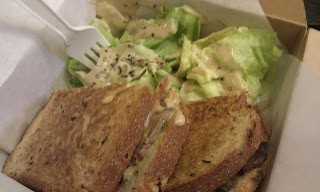 the sandwiches came in a small box with salad by the side. 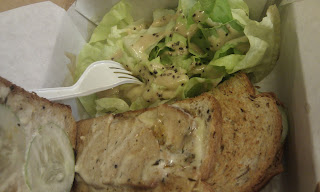 Honey mustard chicken sandwich (RM12.90) - single slices of roast chicken breast with some honey mustard sauce and some cucumber on nice toasted bread. And salad on the side. Tasted good, but not really worth RM12.90? 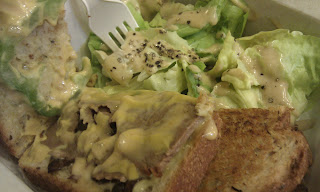 Mr. Beefsteak sandwich - again, single slices of roast beef with some dressing, peppers and the ubiquitous salad by the side. And again, it tasted good, but not really worth RM12.90?
+Wondermilk is a nice place, but ultimately, I don't think I would really be inclined to patronize the place too often as the price just seems a little too steep for what you get.
+Wondermilk is located at Damansara Uptown, on the outer side facing houses, on the same road as the TM Point
Food:       6/10
Drinks:     7/10
Service:    7/10
Value:       4/10
Posted by Unknown at 12:47 AM