on the plate - Bavarian Bierhaus, Jaya 33

So last year, for my birthday, I thought of going German for the year (possibly due to my actually knowing more German than actual Chinese). Since I can't actually go to Germany (not on my salary anyway), German food is probably the next best thing. So, Bavarian Bierhaus, which is located in Jaya 33 (right behind my church) seemed a logical choice. So! Without further ado... here's the food, and my thoughts on the food, unfortunately I can't remember prices but all I can say is... it's rather pricey... 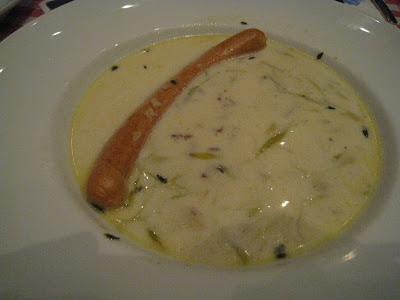 Farmer's soup - Leek and sausage soup... arrived slightly warm, tasted alright but not as tasty as I would have liked. I prefer my creamy soups to be thicker, but it's certainly not bad, and as always, German sausages don't disappoint. 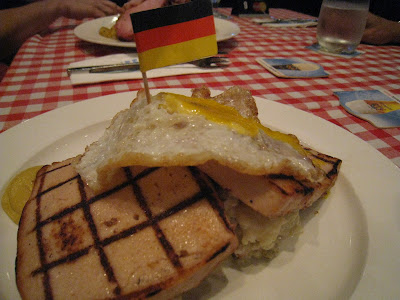 Mixed Grill - I can remember the price for this one! It's RM58. That price nets you meatloaf, bacon, sausage, lotsa potatoes, sauerkraut, a fried egg and a whole bunch of other good stuff. This dish is the bomb. Seriously. Everything is grilled to perfection, and the sear marks on all of it do serious psychological damage to any diet plan. 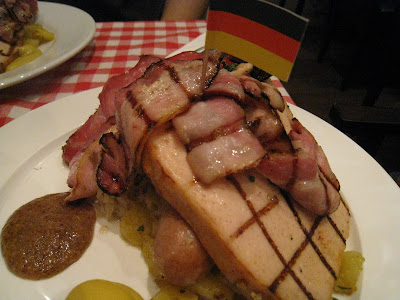 Another view of the mixed grill, from another angle. BACON! 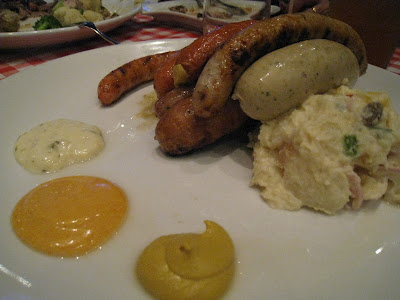 Sausage platter - a combo of almost every type of sausage that they have, with righteous potato salad by the side. They recommend this to share, and I definitely DO NOT disagree. It may look small from the photo, but that amount of sausages can defeat all but the most voracious of appetites. 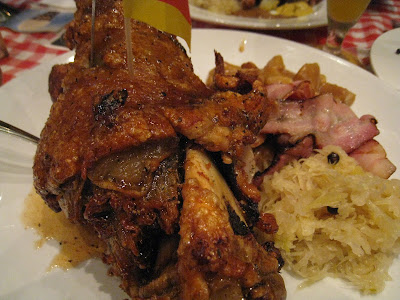 Honey roasted pork knuckle - the piece de resistance... RM68 (or so) nets you this monster knuckle. I've had knuckle before that's small and... bleh. But this one, this one! Crispy, succulent skin that's glazed with sweet honey, well marinated meat inside that's tender and tasty. And it's got potatoes, bacon and sauerkraut by the side. BACON! 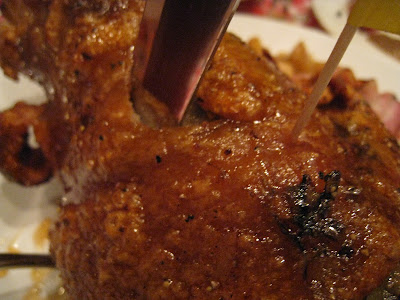 A close-up of the star of the show. I couldn't resist stabby time : D 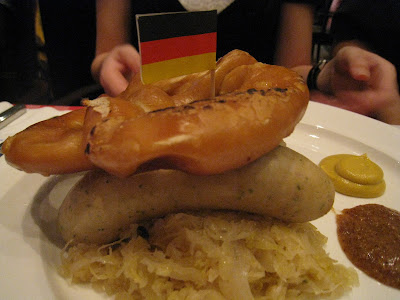 Someone ordered weisswurst (white sausage). It came with sauerkraut (big surprise there) and a large pretzel. 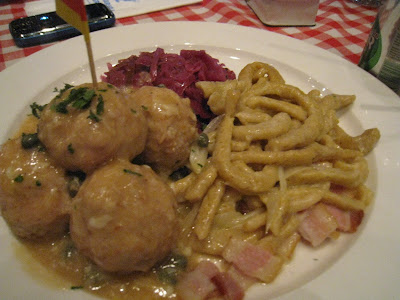 German meatballs came with some strange German noodles and red cabbage which apparently nobody really liked. Must be an acquired taste. The meatballs were good though. 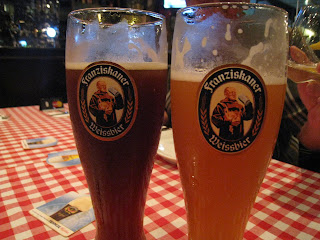 A sampling of German beers. These are Franziskaner beers. Refreshing and not too heavy. 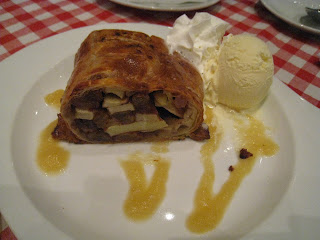 And for dessert, an apple strudel. It was alright, nothing really great to shout about.
Quite the feast, I admit that I attempted to finish the pork knuckle on my own. And failed miserably. But it was good. Very good. I'll be back to attempt it again, but probably not by myself. Service was alright, nothing to shout about, and the drinks and dessert were okay, nothing out of the ordinary, but the food was glorious. BACON!
The verdict: Seriously good food, mostly in portions that will make you go all exploding sheep if you're not a big eater. Order to share. Drinks are mostly beer (what else, considering it's a German place). Prices are on the steep side, but not overly prohibitively so. BACON!
Where: Jaya 33, it's in the front facing the main road, at the corner (if you come out of the main entrance, turn right and walk to the end of the building and you can't miss it)
Food:    8/10
Drink:    7/10
Service: 5/10
Posted by Unknown at 8:33 PM